HISTORY OF THE CLINICAL RESEARCH CENTER:

The MGH Translational and Clinical Research Center (TCRC) began as Ward IV in 1925. It was the second center in the United States specifically designed for and dedicated to clinical research. The impetus for its founding came from Joseph Aub, a prominent early clinical investigator, who was supported by James Howard Means, Chief of Medicine at MGH and David Linn Edsall, Dean of Medicine at Harvard Medical School. The ward began as just two inpatient beds, accommodating mostly metabolic and endocrine research. Many doctors conducted endocrine research on the ward, including Fuller Albright, the father of endocrinology in the US.

In the 1940s, Edward Mallinckrodt, Jr., head of the Mallinckrodt Chemical Company and a college friend of Dr. Albright, funded three additional inpatient beds on the unit. He also started an endowment fund to ensure the continuous operation of Ward IV. As a result of this fund, Ward IV was renovated to include two beds in each of the five inpatient rooms, leading to a total of ten beds. A laboratory, metabolic kitchen, and patient recreation space were also added. In 1949, Ward IV was renamed "Mallinckrodt Ward IV" in honor of Mallinckrodt's contributions. 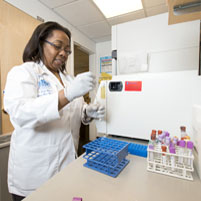 By the 1950s, Ward IV researchers had made many significant contributions. In 1957, Means published a book detailing the ward's history, entitled "Ward 4".

In 1978, Ward IV became a General Clinical Research Center (GCRC) supported by the National Center for Research Resources, NIH. In the 1980s, the Mass General GCRC moved from its location on the first floor of the Bulfinch building to the thirteenth floor of the White building. Facilities included both inpatient and outpatient rooms, specialized research facilities and equipment, expanded space for staff, a core laboratory, and a metabolic kitchen.

The GCRC space in the White building was renovated after 2000 and it expanded further with the acquisition or development of two new satellites: the Clinical Research Center at the Massachusetts Institute of Technology and a site at the Charlestown Navy Yard in close proximity to the Martinos Bioimaging Center. The MGH GCRC was one of the first GCRCs in the nation to incorporate an imaging facility, and remains one of the few CTSAs with this technology.

The Harvard CATALYST is Established

In 2008, the NIH eliminated the GCRC program and established a nationwide program of Clinical and Translational Science Centers (CTSCs) instead. These new grants were awarded at the University level; therefore, the GCRCs of the Harvard Affiliated Hospitals, including Massachusetts General Hospital, Brigham and Women's Hospital, Beth Israel Deaconess Medical Center, and Boston Children's Hospital, all began a process of organizing and integrating their functions, and providing more comprehensive services to an increasing population of investigators throughout Harvard. The GCRCs were renamed Clinical Research Centers (CRCs). The Harvard CTSC, called CATALYST, includes new educational programs, an emphasis on community research and many other resources to support human investigation; however the CRCs continue to remain the central component of the program.